Previous Next
Puduvai Managaram, the Tamil dubbed version of the Malayalam film Doubles, is reportedly doing well with the Tamil audience. The film stars Mammootty, Nadia Moidu, and Taapsee and is a comeback of sorts for Mammootty in the Tamil film industry. The 50th day celebrations of the film were held recently and Mammootty fans were happy to see their favorite star’s film doing well at the box office after a long time. 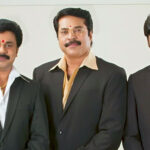