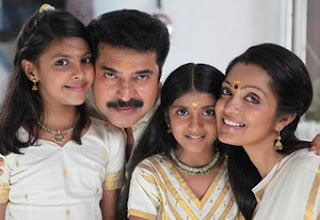 Director Jayaraj’s The Train is based on the chain bomb blasts that rocked Mumbai on July 11, 2006.
In the pattern of several films of the genre that has come out in the past, the film tracks a couple of stories that unites in the end.

In the film, Kedarnath (Mammootty) is an agile cop chasing the terrorists, while Karthik (Jayasurya) is a young musician who is all set to sing for A R Rahman. There are a few more characters like a woman who is trying hard to find money for her grandfather’s Haj pilgrimage, an old man who is there to present a birthday gift to a young kid and so on.

The bomb blasts are shown at the beginning of the film and then, the story traces how the characters come together when the mishap happens. The whole pattern followed in films like Babel, Amores Perros, some of Robert Altman’s movies and also in several recent Malayalam films, has started looking thoroughly jaded due to overuse.

Melodramatic situations which happen in predictable lines, unbelievable confusions, coincidences and evident errors (like the latest mobile phone models for instance) take the zing out of this film.
It is quite evident that Jayaraj has managed to make a potpourri with some limited visuals that he had taken, with Mammootty and Jayasurya. As a result, the shots get repeated which tests the patience of the viewer, after a while. The cinematography and the music are fine.

Mammootty has nothing much to do, with a mobile phone glued on to his ears all the time and plays a cat and mouse game with the dreaded terrorists, all on his own. Jayasurya falls in love with a strange girl (played by Anchal Sabharwal), who decided to give up the idea of killing herself, after he called her by mistake. Anchal and most of the supporting cast, which includes the director’s wife Sabitha, have wooden expressions on their faces mostly.

The film looks more like a mixture of some shots stitched together on the editing table. It has some fine moments for sure, but mostly the film never goes beyond superficial levels. If you are not used to the pattern where several stories intertwine at a certain point, the film may be okay in parts. For the rest of the world, this one is pretty disappointing.
Verdict: Average