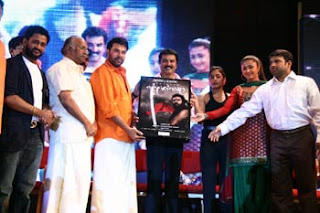 The audio of Hariharan- MT Vasudevan Nair epic Pazhassi Raja was launched at the auditorioum of Gokulam Park in Kochi on Sunday (Sep 20) evening.

It was one of the best conducted events in Kochi recently.

The audio was launched when Mammootty handed over an a CD of the music of the film to Tamil superstar Sarath Kumar, who is also featuring in the film.

Ilayaraja the music director of the film could not attend the function as he was away on a foreign tour.
Mammootty said he was proud to be associated with the movie on Kerala Varma Pazhassi Raja, the legendary king and freedom fighter in Kerala’s Malabar region, who fought the first war of independence against the British men.

The other important guest at the function was Oscar winning sound mixer Resul Pookutty who said he was very fortunate to have been associated with the film in which legends like writer M T Vasudevan Nair, maestro Ilayaraaja, Hariharan and superstar Mammootty are involved.

The film produced by Gokulam Gopalan would be released on Gandhi Jayanti day- October 2, worldwide.