Ragini Dwivedi is a model-turned-actress who made her debut in the Sandalwood industry in 2009 with the film “Veera Madhakari” and has been looking for a chance to make her mark in the Malayalam film industry. She got her chance in 2010 with the film “Kandhahar” opposite Amitabh Bachchan and Ganesh Venkatraman. She has now been cast in another Malayalam film “Face To Face” opposite Mammootty.

Ragini is excited to play the role of Mammootty’s wife, despite the significant age difference. She has made a name for herself in the Tamil and Kannada film industries and is also looking forward to the release of her next Kannada film “Shiva” which stars Hat-trick hero Shivarajkumar. 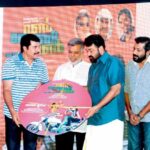