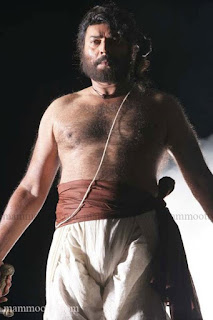 Malayalam super star Mammootty’s magnum opus historical film Pazhassi Raja, being made in Malayalam, Tamil, Telugu and Hindi, has been censored with a U/A certificate by Thiruvananthapuram Regional Censors on August 31. The film, which was expected to grace screens on September 18, has been postponed by two weeks.
Produced by Gokulam Gopalan under the banner of Gokulam Films, the film is directed by Hariharan and scripted by M.T. Vasudevan Nair. It has Mammootty playing the title role of legendary ruler and warrior Kerala Varma Pazhassi Raja. Popular Tamil-Telugu actor Suman plays the villain, Pazhaiveetan Chandu and Tamil actor Sarathkumar plays Edachena Kunkan, the chief lieutenant of Pazhassi Raja.