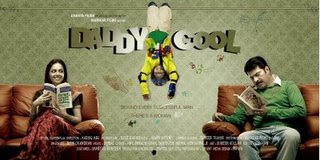 Mammootty’s new movie ‘Daddy Cool’ which has recently completed its shooting will now, grace the theatres as an independent day release. The movie featuring Richa Palod as the heroine is directed by Ashiq Abu.

The immediate release of Mammootty will be ‘Pattanathil Bhootham’ which will be on theatres by the last week of June. This special effects fantasy movie told in the background of a circus troupe, directed by Johny Antony, will feature Mammootty in a double role. The movie with Kavya Madhavan as heroine will have music by Shaan Rehman who became popular with the album ‘Coffee@MG Road’.

As per the present plans, Mammootty’s Onam release will be ‘Kutty Shranku’, directed by Shaji N Karun. This off beat movie is expected to fetch another national acclaim for the actor. Also in the list of new releases from the actor is ‘Vande Matharam’ his bilingual with Tamil action star Arjun, which is in its final stages of production.

The megastar who is presently in America will return by the end of the week to complete his new movies in the pipe line, including Gireesh’s ‘Handsome’, Jayaraj’s ‘Loudspeaker’ and Renjith’s ‘Palery Maanikyam’.