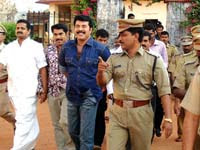 Mammootty arrived at Viyyoor jail in Thrissur for the shooting of the Malayalam movie Ee Pattanathil Bhootham directed by Johny Antony.
The scene involved Mammootty coming out of prison after getting parole and Suraj waiting on a bike to pick him. The shot was filmed there.
Mammootty also participated in a small function arranged by prison employees. Kavya Madhavan and Mammootty are doing the lead. Kavya would join the sets after February 15.