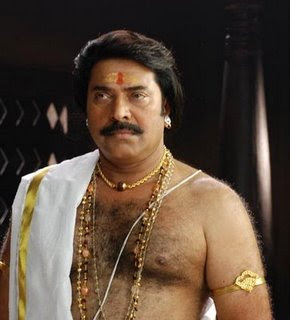 Pazhassi Raja, the forthcoming biopic magnum opus historical film directed by Hariharan with Mammootty in the lead role, was supposed to be released in April 2008 during Vishu. Unfortunately, it was postponed since the shooting had to be called off more than five times since it started in 2007.

Untimely heavy rains, clashes in the dates of the artists and the accidental death of two crew members had resulted in constant delays in shooting Pazhassi Raja. Anyway, megastar Mammootty is now all determined to complete the movie within three weeks. Mammootty has earmarked nearly three weeks to complete the final schedule at Madikkeri in Karnataka.

After Pazhassi Raja, Mammootty will join the final schedule of director Shaji N. Karun’s prestigious venture Kutty Shranku at Kandhapuram. The film is produced by Reliance Entertainment under the banner of Big Motion Pictures, the first-ever Malayalam production by Anil Ambani’s entertainment company.