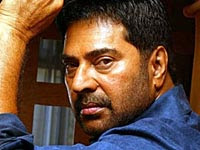 Megastar Mammootty’s Superhit film Big B, is now being dubbed into Tamil as Manika Baasha.

Big B was one of the biggest hit movies by Mammootty and according to the film critics it was the most stylish gangster movie ever made in Malayalam. The film is all about a tough guy taking revenge on his mother’s brutal murder.

Tamil actor Pasupathy played the role of a police officer in the film. He is the person who investigates the murder of Mammootty’s mother. Then there is Tamil actor Bala’s sexy song with Mamta Mohandas on the beaches of Rameswaram.

It looks like Mammootty has a dubbing market in Tamilnadu, where his style of acting has an audience.
he distributors believe that Mammootty’s popularity in Tamil will ensure good collection in the box office. So they have titled the film as Manick Badshah.

Meanwhile his straight action film Aruvadai with action king Arjun is likely to release on January 26.