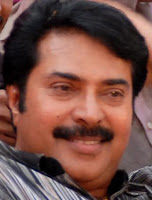 Malayalam superstar Mammootty is currently busy shooting with director duo Rafi Mecartin for Love in Singapore at Kochi, Karaikudi and Bangkok. Planned to be completed within 60 days in one schedule, the film revolves around Mammootty’s character, Machu, a poor who later becomes a very rich scrap dealer.Navneet Kaur is the heroine in this film, being produced under the banner of M.H.M. Productions.

After completing Love in Singapore, Mammootty will start his next film Pattanathil Bhootham by the end of December. Scripted by Udhay Krisshna-Sibi K. Thomas team, the movie is directed by Johnny Antony.


Bhootham, planned as a humorous fantasy thriller, tells the story of Jimmy, an adventure bike rider in a circus, who accidentally gets some supernatural powers, with which he tries to fight the baddies of society. Reports say that Mammootty will attempt some daredevil acts of a bike racer in this film.

For the first time in her career, Kavya Madhavan will be the heroine role opposite Mammootty in Pattanathil Bhootham which most probably will be her last film, since she is likely to tie knot in March, 2009 with Nischal Chandra, a computer engineer working in National Bank of Kuwait as Technical adviser.