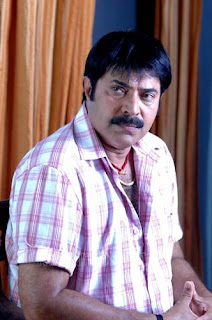 After the great success of ‘Kadha Parayumbol’ Mammootty appear in a short cameo as himself in the movie ‘One Way Ticket’, is ready to release. the film is directed by Vipin Prabhakar, and based on a plot about Kunjaapoo, a jeep driver who is an ardent fan of the star and his effort to maintain a balance between his love for the star and his personal life.
Lakshmi Rai appears for the first time with Prithviraj in this film, which also features Jagathy, Jagadheesh, Thilakan, Salim Kumar, Suraj Venjaramodu, Balachandran Chullikkadu and Sukumari.
The great speciality of this film is that, for the film, a scene in the original scripts for the next Mammootty film ‘Parunthu’ was shot, to show Kunjali meeting the star in one of his film sets. It is the first time in India, where an original scene of a movie is shot for being used in another movie. The crew of ‘Parunthu’, director Padmakumar, scriptwriter T A. Razzak and cameraman Sanjeev Shankar also participated in this shoot.