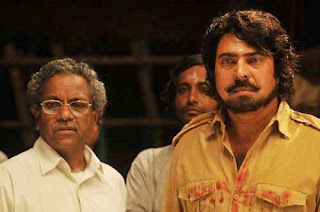 Renowned filmmaker Shaji N. Karun’s latest movie Kutty Sranku’s Shooting has started at the backwaters of Alappuzha. This movie is to feature Mammootty as a Chavittunatakam artist. Kamalinee Mukherjee, one of the heroines, will be cast as the daughter of a Chavittunatakam teacher.

The story revolves around the character of Mammootty who is known by different names in different areas. As Mammootty act in diferent roles, it will feature three heroines, Padmapriya, Kamalinee Mukherjee and Meenakumari from Srilanka.Also in the cast are Kozhikode Sharada, Suresh Krishna, Siddhique, Krishnan, Rajiv Kalamasserry and Rajesh Sharma.

As Chavittunadakam featured in this film, a thattu (platform for the art form) has been constructed. Thirty artists including Mammootty are being trained in the various steps of the art form by Fr. V.P. Joseph of ‘Aalappuzha Pauranika Ranga Kala Peedom’ to support their realistic performances in the movie.

The film is produced by Reliance Entertainment under the banner of Big Motion Pictures, the first-ever production by Anil Ambani’s newly launched entertainment concern in Malayalam. It will be shot in three schedules in and around Alappuzha. As the film is based on the change in seasons, environmental and climatic changes, the second and third schedule of the movie will be shot by the end of September and December respectively.